Most of the popular drone brands you hear these days tend to have expensive models which start from around $300 to $400, and advanced models can go well above a thousand dollars. If you’re looking for low-budget drones, you’ll find a lot of products under $100 too, but they’re usually toy drones or simple flight drones with no advanced features.

But what if you could get a drone with high-end features like auto-return and HD camera for less than a hundred bucks?

That’s precisely what Sky Viper has to offer. Sky Viper drones are smart, autonomous, and pocket-friendly. You don’t have to invest a lot of money, but you can still enjoy more than just an introductory flight. It’s even perfect for beginners, as they can get used to advanced features and auto flight modes to handle high-end drones in the future better.

Let’s check out all the drones that Sky Viper offers in this review.

Sky Viper is a relatively new drone manufacturer, having started in 2018. They have adopted a low-budget, beginner-friendly approach with their drones. Sky Viper has four different models in the market:

Dash is Sky Viper’s simplest and cheapest model. It’s called the nano drone for a good reason – it’s super small and compact. It has a sporty design despite the small size and is amazingly easy to fly. Here are its key features:

You can launch and land the drone with a single button. Press the launch button, and the drone immediately lifts and hovers in mid-air, while the land button makes the drone take a slow descent and gentle landing.

You can toggle between two flight modes – manual and auto. In the manual mode, you have to control all the flight directions on your own, while the auto mode keeps the drone at a fixed altitude, so you only need to control the horizontal movements.

The drone can perform eight different stunts like flips and barrel rolls. The stunts are activated by certain buttons on the controller, so you can launch the drone into cool stunts with just one tap.

Who Is It Best For?

Sky Viper Dash is best for kids who are new to drones. It’s easy to fly, so children can quickly get used to the controls, and auto-launch/land makes things even convenient. Different stunts will keep the children in awe, and they’ll have a fun time flying the doors both indoors and outdoors. For a budget price, Dash is an excellent drone for kids.

While the name promotes Fury as a stunt drone, it can do a lot more than that. It’s bigger than Dash, but still relatively compact compared to other drones. Most of its features are also similar to Dash, but there are some additional features as well. Let’s take a look at all of its features.

Like the Dash, Fury can also perform amazing stunts with just a single press of a button. You can even control the barrel rolls in four directions and set the drone to perform multiple 360° flips.

As soon as you remove your hands from the controller, the drone automatically comes into a stationary hover. It can maintain its position accurately and even resist and compensate for drifts and light winds.

Fury is equipped with a small sensor camera at the bottom, which continuously scans the ground and adjusts the drone’s altitude accordingly. The surface Scan feature significantly improves the stability of this drone.

Fury takes all the features of Dash and further enhances it with smart sensing and scanning capabilities.

Who Is It Best For?

Sky Viper Fury is best for all beginners and first-time drone pilots. It’s bigger than the Dash and doesn’t feel like a toy. The flight experience is smooth, so that you can practice your drone flight skills and tricky manoeuvers with this drone. The stability and hands-free hovering prove extremely helpful for beginners as they learn to control the drones properly.

Fury and Dash are great as starter drones, but let’s face it – one of the essential parts of a drone is a high-quality camera. If you want to capture scenic shots and aerial videos with your drone, then you’re going to love Sky Viper Scout, the video drone. Here are its key features:

Scout is equipped with an excellent camera that can record 720p videos at 30 fps and even live stream videos at 15 fps. The camera has a 100° wide range which can be adjusted when you’re taking beautiful shots.

The drone also comes with a Micro SD slot so that you can enter a memory chip for better storage. Record all your videos and quickly transfer them to any other device with a memory card. You’ll have to buy the chip separately as it’s not included with the drone package.

You can also control the camera, but it only pivots in the vertical direction. Point the camera forward, and you can record the flight view or turn it downwards to record the scenery below.

Both these features, which we discussed for Fury, are also integrated into the Scout drone. So you can expect smooth and stable flight as the drone manages its altitude automatically.

Check it out on Sky Viper’s homepage

Who Is It For?

Sky Viper Scout is an excellent choice for anyone who wants a low-budget camera drone. Of course, it doesn’t let you record crystal clear 4k videos, but it has a decent camera that can record up to 720p, and that too for less than $50. People who are starting as content creators or video makers but don’t have much drone experience should also consider this drone. It’s perfect for starters, doesn’t cost you a lot, and lets you record amazing pictures and videos.

Journey is Sky Viper’s most advanced and high-end drone, which combines the features of all previous models with new autonomous features. It’s also the only Sky Viper drone that’s above the $100 mark. Let’s check out all its features.

Most of Journey’s features are carried over from the previous models, so we can just sum them up together.

These are the features that are new and exclusive to Journey, the GPS drone.

With a precise GPS module, Journey can find and make its way back to you on its own when you activate the auto-return feature.

Capable of visual recognition, Journey can be set to track and follow you autonomously by activating the Follow Me Mode.

When you lose control of the drone, or its battery level falls critically low mid-flight, the Flyaway Prevention mode will activate. It will override your manual control and set the drone to auto return mode, so it flies back to you right away.

You can connect the drone footage direct to your phone screen for an FPV experience. The controller even has a holder for your phone, so you can have eyes on the view at all times when flying.

While most of the high-quality and advanced drones in the market come with equally high price tags, it’s hard to find a good low budget drone. But Sky Viper offers user-friendly drones with excellent features at really low prices, making them suitable for beginners, those with a low budget, and adults and children alike. From simple toy-like drones to the camera and GPS-equipped drones, Sky Viper impresses in terms of features, usability, and pricing. 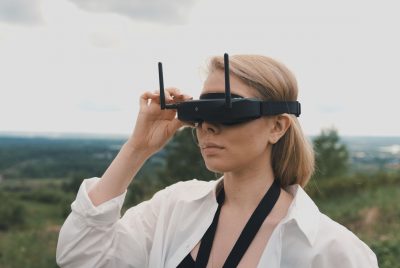